“Kings of Europe” - History of the G2 team

8 European titles, the most successful team from the west, one of the most popular esports organizations. Find out how the empire was created in this article.

The beginning of the way

Oddly enough, but we should start our story about G2 with SK Gaming, it was in this team that the future founder of G2 - Carlos Rodríguez “ocelote” Santiago played. 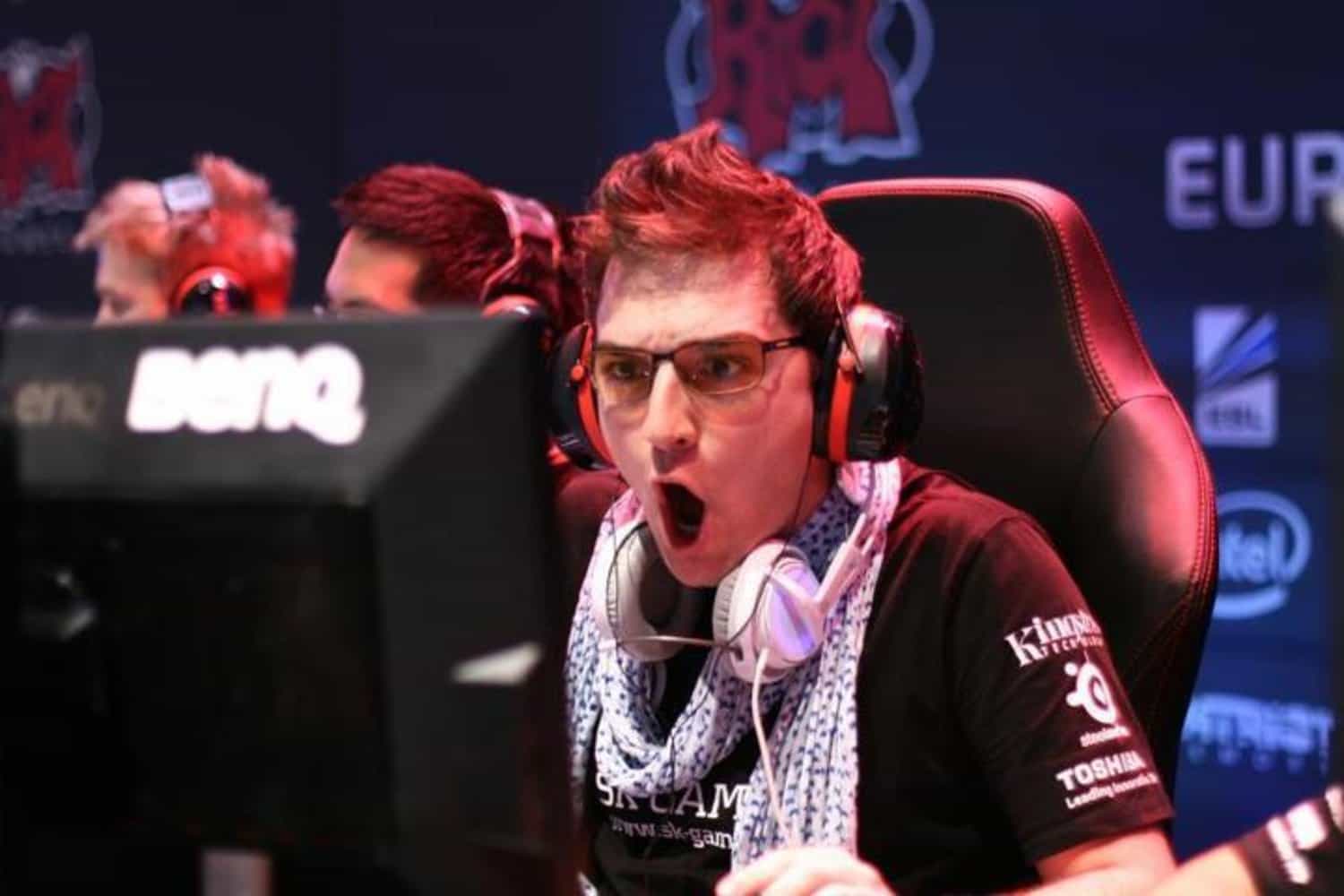 Ocelote as part of SK Gaming

Things were not going well for that SK lineup. Having started its way from the prizes in the first and second seasons at the championships of the IEM series, the roster by the 3rd season dropped to 5-8 places. One of the reasons for this decline was Riot's transition to the format of regional leagues, which were clearly not to the liking of the mid-side of the team. Carlos got used to the rumble of arenas, rabid support of fans, and with the new European league, he had to live away from home, and every week he was not waiting for stadiums chanting his name, but only 50 people in the studio. The team became a strong middle peasant and rarely rose above the middle of the table. In November 2013 ocelote went inactive.

In December, Carlos announced the launch of his own project, Gamers2. The beginning was not very smooth - financial scandals, a failure in qualifying for the LCS EU and a loss to those whom the Spaniard did not consider earlier as rivals. Having trampled in one place for a year, Carlos decides that he should not be torn between the careers of a player and the owner of the organization, and on February 16, 2015, he announces the end of his professional career.

After finishing his career, Carlos also disbands the entire roster and signs the Team Nevo roster. 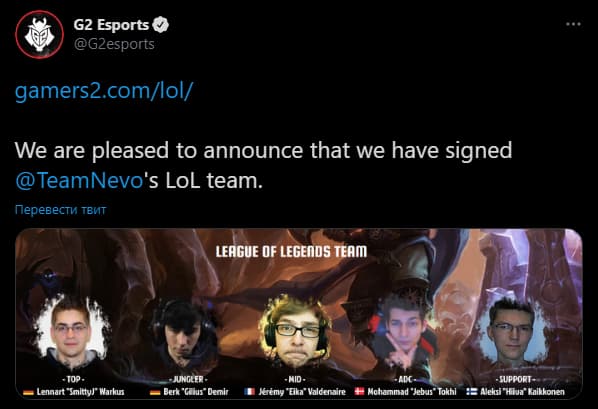 There were constant changes in the composition. Carlos was looking for talented players hungry for victory and experimented with the roster. As a result, at the end of the year, G2 advanced to the play-offs for the right to play in the top league of Europe, and how significant it was that the last match on the way to the top of the new ocelote had to be played against SK Gaming.

Losing 0-2 SK, the new team managed to turn the tide of the battle and finish the game 3-2 in their favor. In 2016, LCS EU was waiting for them.

By the beginning of the new season, the roster had not changed, and at the same time was able to take first place on the first attempt and book a place for itself at MSI, where, however, they failed to repeat the success of the spring split in their home region. The European squad took only 5th place, and this provoked Carlos to make changes in the composition. As a result, as part of the summer split for G2 were:

The summer split also succumbed to the already updated roster on the first try, which did not lose a single meeting, earning 8 draws. Carlos, although he could not achieve such success personally, but helped the guys do it. 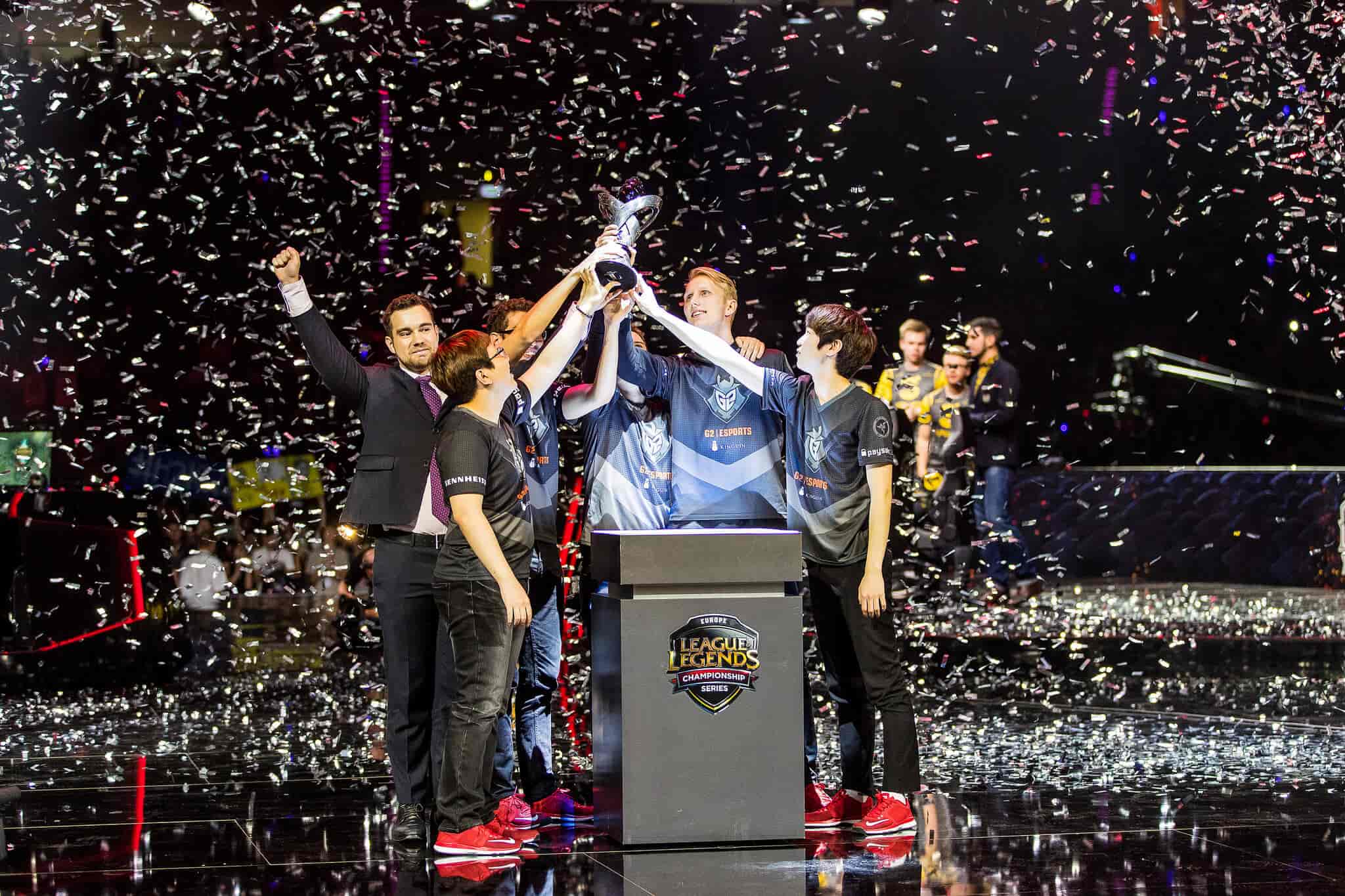 With the victory in the summer split, G2 guaranteed themselves a ticket to the Worlds, which, unfortunately, failed without leaving the group stage.

Fight against Fnatic for the European throne and first international successes

In 2017, Unlimited left the team and came Send0o as a replacement for the top. At the very first tournament - IEM Season IX World Championship, G2 finished second, losing only to Flash Wolves twice during the tournament: the first time in the group stage, and the second time in the final 0-2. The mid-leader of the PerkZ team was named the MVP of the tournament.

In the spring split, the “samurai” gave up only 4 cards and again went to the Mid-Season Invitational. 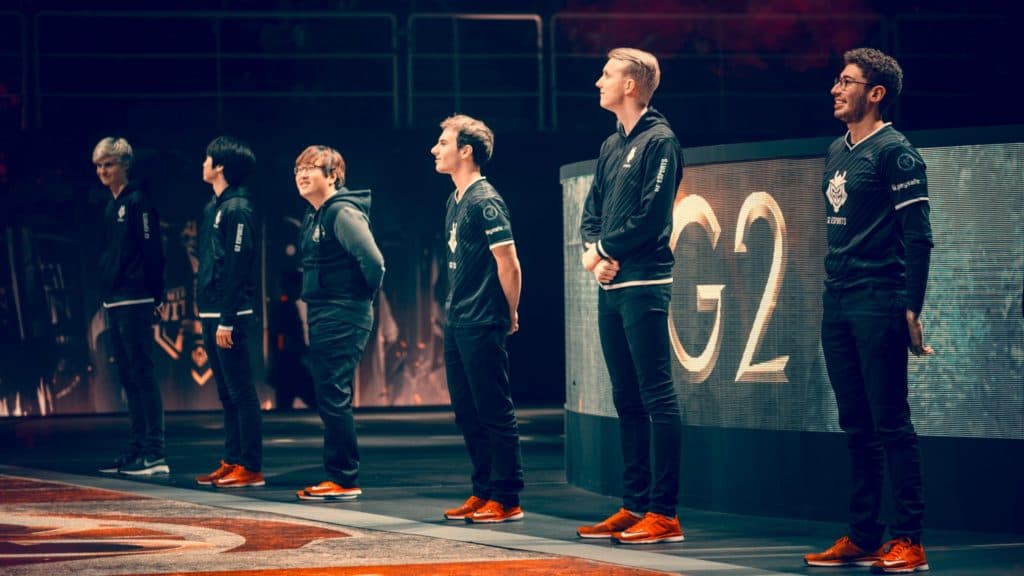 G2 performed a small miracle by finishing second. Before that, European teams at MSI did not rise above 3 lines. The team of Carlos showed that he can fight on equal terms with the Korean giants, but unfortunately, they failed to confirm this at the Worlds. G2 finished third in the group, losing the playoffs to Samsung Galaxy and Royal Never Give Up, which took 1st and 3rd places respectively. However, this result did not please the head of the organization, and the team was replaced.

Only PerkZ remained from the 2017 roster. He was joined by Wunder, Jankos, Wadid, Sacre and Hjarnan.

It was from 2018 that its own El Classico was born in Europe: Fnatic vs G2. The two teams currently have 15 European Spring and Summer Split titles. Only one team was able to earn such a title, and then only once. They were Alliance.

In season 8, the victory in this confrontation unconditionally went to Fnatic. They were able to upset the “Samurai” in the final of the spring split, and then won the summer split, in which G2 took only 5th place. At the Worlds, the British organization also proved to be superior to Carlos' team, reaching the final. G2, however, stumbled in the semifinals.

It was necessary to strengthen and in 2019 “Samurai” managed to lure Caps from the camp of their direct competitor in the region. PerkZ started playing on the bot and it paid off - the team played the best season in its history. 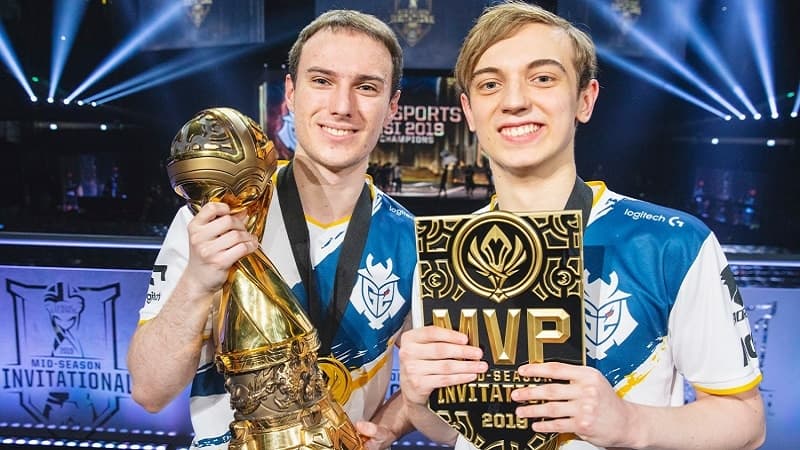 Caps and PerkZ with MSI 2019 Trophies

Victory in two splits, triumph at MSI and only one misfire - 0-3 in the Worlds final from FunPlus Phoenix. This year, only one LOL has brought the organization $ 900 000.

After winning MSI and second place at the Worlds, everyone began to believe that Europe could be stronger than Asia, and so could G2. The roster remained the same and they were able to skate across Europe in 2020, upsetting Fnatic twice in the 3-0 split finals. 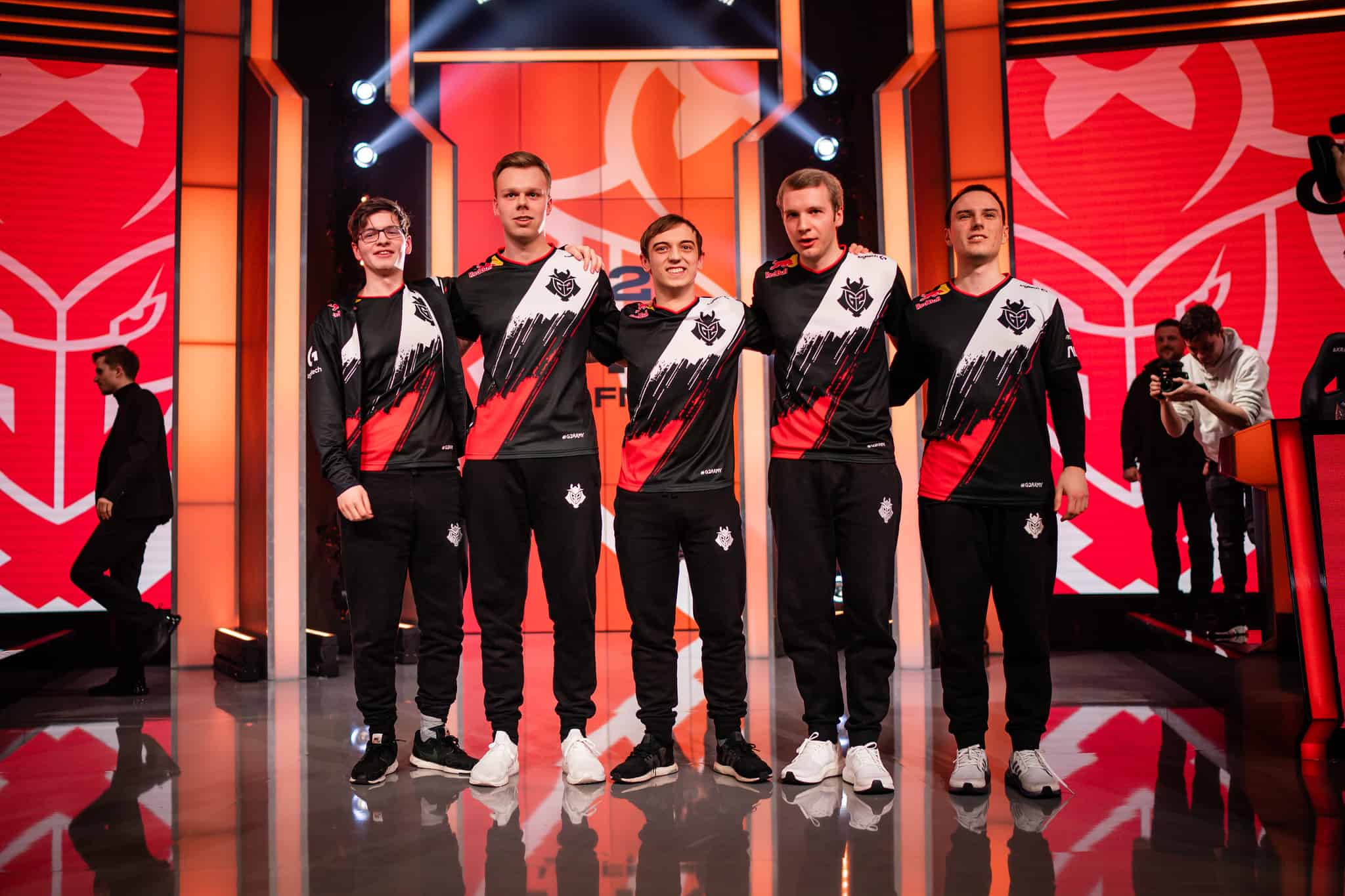 However, at the Worlds, there was another misfire that shook the confidence that the West could compete with the Asian titans. G2 lost to future winners - DAMWON 1-3.

After the anniversary season, PerkZ left the team, he has been in the team since 2015 and has presented the team with many titles. Reckless came to replace him from Fnatic. Currently, G2 are in third place in the spring split with a 5-2 stats.

What conclusion can be drawn from the history of G2? Probably something that you should always follow your dream. And even if you cannot achieve it in one way, then you can always choose another, the main thing is not to give up, as Carlos did.