The Asian regions took a week off, the main part of the split had just begun in America, and the most anticipated match of the first half of the year was held in Europe. All this and not only in this article.

The Chinese region finished the first half of the spring split and went on its legal hiatus. At the end of 5 weeks, EDward Gaming is holding the lead, with statistics 7-0, followed by the world champions of 2019 - FunPlus Phoenix and Royal Never Give Up, with a score of 7-1 and 6-1, respectively. Interestingly enough, Vici Gaming's Rare Atom team was able to break 6 positions in week 5. LGD, Suning and TES are at the bottom of the tournament position, so, most likely, we will see new faces at the Worlds from China. 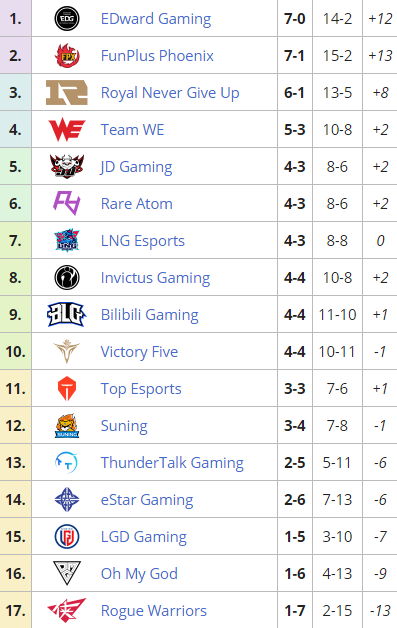 Match of the week: IG vs RNG

El classico of the Chinese region. These teams constantly upset each other, and gave battle on the international stage to such giants as G2, T1 and Liquid. It doesn't matter what kind of lineups these organizations have, their matches get a crazy number of views.

In Korea, T1 slightly improved their position in the standings before the rest. Now they occupy 5th place with a score of 4-4, DAMWON KIA is still in the lead, at the moment they are going 7-1, and in the near future no one will be able to displace them from there. The Hanwha Life Esports team was a pleasant discovery. Over the past two years, this team could not rise above 6th place in their region, but now they are in 3rd place. 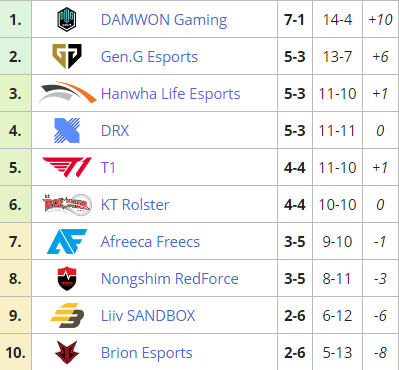 LCK table after 4 weeks of play

Match of the week: HLE vs Gen.G

An important match, between the 2nd and 3rd place in the region. The closer you are to the top, the more likely you are to ride MSI. Who can compete with DAMWON KIA in the dispute for the first place?

The opening tournament ended with Liquid's victory. They defeated Cloud9 3-2 in a stubborn match and earned $150 000. The split itself began with Superweek, which lasted 3 days instead of two. All three matches were won only by 100Thieves and Cloud9. Lock-In's triumphs tied for 3rd place with Evil Geniuses and a 2-1 stat. 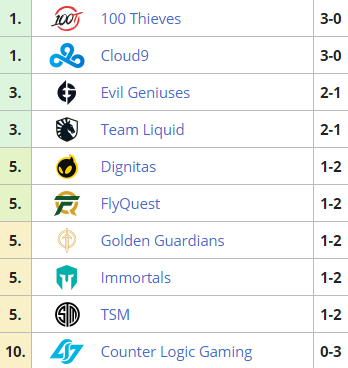 LCS standings after the first week

Match of the week: TSM vs CLG

Incredible comeback and intense play until the last second. This game is another confirmation that you never have to give up.

The season is slowly but surely approaching the first international tournament - MSI. Only the first places of each region are selected for it. Most likely we will see an intensification of the struggle for the necessary points in the standings, but only in a week. See you at the Rift.